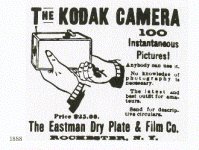 George Eastman wanted a camera that was easier to use. He wanted a camera that was easy to carry. George Eastman's family did not have a lot of money. He had to stop going to school when he was 14. He had to work. He needed to earn money for his family. George worked at a bank during the day. At night, he experimented in his mother's kitchen. In the 1880s, he invented an easier-to-use camera.