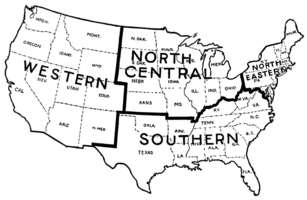 As the United States moved closer to civil war, the country divided more and more. Sectionalism became a problem. This is the loyalty to a part of a nation, but not the nation as a whole. Americans saw themselves as Southerners or Northerners. People who lived in different parts of the country often disagreed. This was true even in Congress.

Sectionalism began to grow early in the 1800s, right after the War of 1812. As more factories were built, the South and the North grew further apart. When more people moved to the West, the country began to divide in this way, too.

People in the North were busy building new factories. They were also working in textile mills. People in the North favored a tariff that would help their businesses. A tariff is a tax that made goods that came from outside of the United States cost more. The tariff would make goods from Europe cost more than goods made in America.

People in the South did not like the tariff. In the South there were a lot of farms. There were not a lot of factories. The tariff would not help them. The South would have to pay more money for the things that they bought. This made them very unhappy.