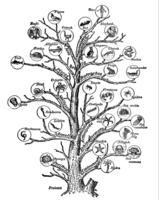 Nearly two thousand years later, the Swedish biologist Carolus Linnaeus created a different classification system. His idea was to group animals and plants based on similarities in their structures. For example, Linnaeus placed animals into groups based on whether or not they had a backbone. Like Aristotle, Linnaeus divided living things into two large groups - plants or animals. He called these groups "kingdoms." But today's scientists have tools and technology available to them that have allowed them to study organisms more closely. Scientists now realize that some organisms don't quite fit into the plant or animal group. As a result, several other kingdoms of organisms are now used. Today's scientists look at cell structure, how the organism moves, gets food, and reproduces.

Some people today use five kingdoms; some use six. This is an explanation of the six kingdom classification system. First is the animal kingdom. Members of the animal kingdom are made up of many cells. Their cells have a nucleus that is contained inside a membrane. All animals get their food by eating other organisms. Animals are divided into two large subgroups: invertebrates (those without backbones) and vertebrates (those with backbones). Examples of vertebrates are fish, frogs, lizards, eagles, dogs, and people. Invertebrate animals include sponges, jellyfish, coral, insects, worms, and sea stars.