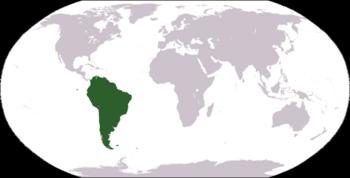 South America lies in the western hemisphere. Most of it is in the southern hemisphere. It is a middle-sized continent. Three continents are larger. Three continents are smaller. It is almost completely surrounded by water. The Pacific Ocean borders it on the west. The Atlantic Ocean borders it on the east. North America and the Caribbean Sea lie to the north and west. The continent is joined with North America at the border of Colombia and Panama.

The longest mountain range in the world is in South America. The Andes Mountains stretch across 7,000 km or 4,400 miles. They are the tallest mountains in the world after Asia's Himalaya Mountains. There are many volcanoes in the Andes. Earthquakes happen often.

The largest river is the Amazon. The Nile River in Africa is longer, but the Amazon carries much more water. The Amazon River runs through the largest rain forest in the world. This area has more species of plants and animals than any other part of the world. About ten percent of all plants and animals found in the whole world live in this rain forest. The trees and plants of this region make a lot of oxygen for the Earth.