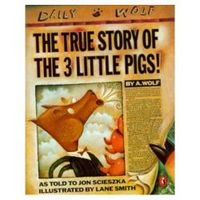 Stories with a Twist

Everybody knows the story of the Three Little Pigs. Or at least they think they do.

Jon Scieszka was born on September 8, 1954. He was born in Michigan. There were six boys in his family. He is the second-oldest. Jon's dad was an elementary school principal. His mom was a nurse.