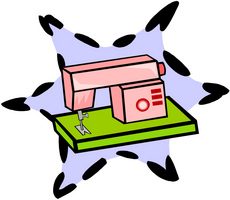 "Scooter, get off there!" Melody cried. Her cat had yet again jumped up onto her sewing table. She did not want any cat hairs in her new sewing machine. That thing had been expensive!

Melody pulled out some corduroy material and began to cut it for a tote bag. She was so excited to finally have a sewing machine that could handle heavier material. She had really gotten interested in creating bags, scarves, and other accessories. She had even started a little business and had a basic website! Her brother liked working with computers, so he had designed the site for her, and she gave him a percentage of every sale she made from the site. They were saving the money to buy their own cars!

Today, Melody started working on a burgundy tote bag. The stronger material would allow someone to carry several books or other heavy items without risk of the bag ripping. She had some friends who had to carry several books between classes, and she hoped one of them would test it out for her. In exchange, she would give them a complimentary bag.

She selected some matching thread and began to set up her machine. She carefully inserted the spool and threaded the needle. She wound some burgundy thread on the bobbin and inserted it into the machine. Then she went to her MP3 player, plugged it into the speaker on the shelf, and set it to the classical playlist. As the strains of Mozart's "Requiem Mass in D Minor" wafted through her room, she began to sew the material to form a tote bag that was about 24 by 24 inches. She loved sewing to Mozart!

Melody worked for about an hour (if you don't include the breaks she took to get a snack, stretch, and call a friend). She absolutely loved to sew. Her thoughts often traveled to happy memories, such as the trip to Europe she and her family took last year. She had been inspired by the fashions in Paris and the artwork in the Louvre. She had been intrigued by the crafters in Eastern Europe and in the theater in London. When she sewed, she tried to incorporate the creative ideas she'd digested from these experiences into her creations.