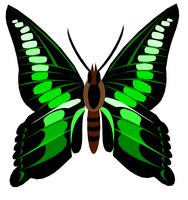 You probably know what symmetry means in math class. When a figure can be divided along a line or plane, and the two halves are congruent, we say it has symmetry. In nature, too, symmetry can be seen in plants and animals. One way biologists describe animals is the type of symmetry the animal's body has. Here are some of the different types of symmetry.

Animals with bilateral symmetry have one line that divides them into two mirror images. Look at a butterfly. If you drew a line exactly down the center of its body from its head to its tail, the two halves would be the same, but mirror images of each other. There is only one line of symmetry where this is true. In spite of the complexity of some butterflies' patterns, symmetry exists. People, dogs, cats, and elephants all have bilateral symmetry.

Animals with radial symmetry have body parts arranged around a central point. Any line drawn from one side through the center to the opposite side will divide the animal into two symmetrical halves. Animals with radial symmetry have many lines of symmetry. Because of the circular arrangement of their parts, radially symmetrical animals do not have distinct front or back ends. They may have distinct top and bottom sides. Some examples of these animals are jellyfish, sea urchins, corals, and sea anemones. A bicycle wheel also has radial symmetry.