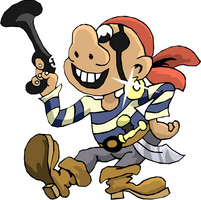 Do you know what a pirate is? A pirate is a thief who sails on a boat. Pirates use boats to find other boats on the ocean. Pirates climb on the other boats and steal from them. A long time ago, they stole things like gold, gems, and spices.

Doesn't that sound funny? It doesn't make much sense to most of us. It's the way pirates talk in movies. Real pirates came from many different places. Most of them could not read or write. When they talked, they used words from many different languages. In time, there were many words that only pirates used.

A few years ago, two friends were playing a game. One of them was hit with a ball.