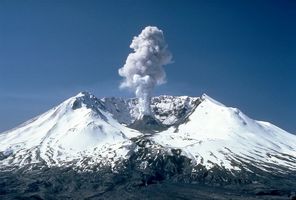 The 1980 Eruption of Mount St. Helens

Before white settlers arrived, the Native Americans considered Mount St. Helens a sacred place. The mountain was given several names by the local natives including Tah-one-lat-clah ("Fire Mountain") and Loo-wit ("Keeper of the Fire"). Captain George Vancouver spotted the mountain and named it after his friend, the British Ambassador to Spain, Lord St. Helens.

Mount St. Helens is one of several volcanic peaks that make up the Cascade Range in the Pacific Northwest. It is part of the Pacific Ring of Fire found on both sides of the Pacific Ocean. It is located in the state of Washington about fifty miles north of Portland, Oregon, and ninety-six miles south of Seattle. It was once the fifth highest peak in Washington. Its appearance was compared to Mount Fuji in Japan. Melting snow from the mountain emptied into serene Spirit Lake at its base. Streams from the mountain also fed three main river systems: the Toutle, the Lewis, and the Kalama rivers.

Earthquake monitoring equipment was first installed on the mountain in March 1980. It immediately detected seismic activity. Thousands of small earthquakes signaled the volcano was awakening. A bulge on the north side of the mountain was growing. Eruptions of steam were seen nearly every hour that month. Government officials set up a ten-mile "red zone" around the area to limit tourist activity. By May of 1980, Mount St. Helens began to tremble.