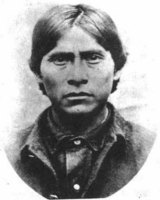 The Apache Kid: Outlaw Legend of the Southwest, Part 2

When the Kid finally realized the trouble he was in, he and three other scouts rode back to San Carlos to find Sieber and Captain Pierce. A crowd of Indians had gathered to see what was causing all the commotion. The Kid confessed what he had done to his commanders. The officers ordered the four Indian scouts to disarm themselves. Kid was the first to lay down his weapon. They were told they would have to stand trial. Captain Pierce ordered the four scouts to the guardhouse to be locked up.

As the scouts headed to the guardhouse a shot was fired from the crowd and a fight broke out. In the scuffle, Sieber was shot in the leg. It ended up crippling him for life. The disarmed Kid broke away and ran for cover. He and the other scouts found horses and rode off into the Arizona wilderness along with a dozen or so other Apaches. Sieber blamed the Kid for his injury even though the Kid was actually not the one who shot him. Two troops of the Fourth Cavalry followed the escapees.

As news of the trouble spread, the territory began to prepare for another Apache outbreak. The cavalry followed the escaped men for two weeks. When they were located, the cavalry managed to capture their horses, supplies, and equipment. The Kid and his band escaped again, this time with nothing but the clothes on their backs. Without horses or weapons, the group faced little chance of survival in the wilderness.