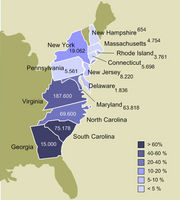 The Beginning of Slavery in the Colonies

Caption: Map shows the number of slaves in 1770 in the 13 English colonies of America.

Colonists in Jamestown learned to grow tobacco. It was a hit in England. In 1640, Virginia exported 670 tons of tobacco to England! Large farms sprang up that grew tobacco. These were the first plantations in America.

A planter needed many workers to grow tobacco. The land had to be cleared. Seeds were planted. When the plants were ready, leaves were picked and dried. Then they were packed in shipping barrels for exporting.