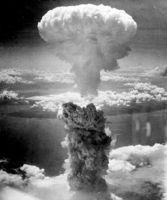 The Bombing of Hiroshima and Nagasaki

Caption: The "mushroom cloud" from the atomic bomb rises 11 miles into the air over Nagasaki on August 9, 1945.

In the spring of 1945, World War II was nearing its end. Victory in Europe was claimed on May 8, 1945. Hitler was dead. The Germans had surrendered. In the Pacific, Okinawa, only 400 miles south of Japan, fell in June 1945. Still, Japan did not surrender. President Truman knew that Japanese citizens were armed. Not just soldiers, but everyday citizens of Japan would fight an American attack. It was thought there were still nearly two million Japanese soldiers inside Japan. Truman thought that invading Japan would result in many deaths on both sides. He believed the war would drag on until the last Japanese had been killed.

The leaders of the United States, Great Britain, and China issued the Potsdam Declaration on July 26, 1945. This document called for the surrender of Japan to the Allied Powers. It stated that Japan would face "prompt and utter destruction" if it did not surrender.