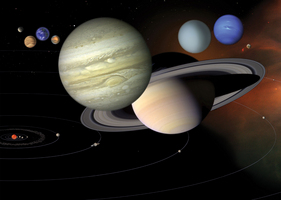 The Family of the Sun

Our solar system is a group of eight major planets and their moons circling the sun. But that's not all! There are some dwarf planets (such as Pluto), rocky asteroids, and icy comets that are part of our solar system, too. Our sun is really a star, just like the twinkling stars we see in the sky at night. Those stars are very far away. Not much of their light reaches the Earth. Our sun is much closer, and so it seems much brighter to us. We can feel its heat. Our sun is a giant ball of hot, glowing gases.

Our solar system began to form about five billion years ago. Before that, it was a giant cloud of gas and dust. The cloud began to spin and collapse. As the cloud was spinning, gravity pulled most of the dust and gas to its center. The star we call our sun formed. It contains about 98 percent of all the matter in our solar system. Around it, leftover gas and dust swirled in a large circle, much like water swirls in a circle going down a drain. Chunks of gas and dust began to gather together. Over time, they became our planets.