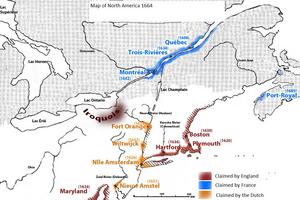 In the one hundred years following the voyages of Christopher Columbus, many European explorers came to the New World. At that time, North America was an untamed land. There were forests, mountains, rivers, and Native American (Indian) villages. In Europe, kings, queens, and explorers talked of the new land. Did one of its rivers offer a quicker route between Europe and Asia? Were there gold, silver, and jewels for the taking?

Ships from England, France, Spain, and the Dutch Republic (now the Netherlands) crossed the Atlantic Ocean. Passengers came to America for many reasons. Some were paid to explore the new land. Some were there to draw maps. Some hoped to find gold and riches. Some wanted to get away from the busy cities of Europe. Some wanted to start a new life with land of their own and the freedom to live the way they chose.