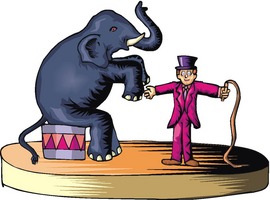 Jane and Tommy were wiggling in their seats. Their eyes were huge. They were excited. In front of them were three rings. They saw tigers in cages. There was a clown riding a bike. The lights went out. A spotlight made a circle on the floor. A man in a red coat was in the circle. He had a black top hat. He had a whistle. The man started talking. He welcomed the people to "The Greatest Show on Earth!"

The circus started many years ago. It is one of the oldest forms of entertainment. On May 19, 1884, the Ringling Brothers Circus had its first show. The seven brothers worked together. They wanted to have the best circus show. They have been called "The Kings of the American Circus."

The Ringling Brothers worked hard. Experts say that they had the best-run circus in the country. The brothers wanted people to like their show. They were known for being fair. Many other circuses would have games set up. People would play them. They would not always win. The games were set up so that people would not win. The Ringlings did not allow those games during their circus. They knew it was not fair.