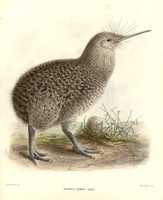 People of New Zealand are called Kiwis. This is a nickname. Kiwi birds are the symbol of New Zealand. Kiwis are flightless birds. Their wings are so tiny they are hard to see. Most birds have hollow bones. This makes them lighter and more able to fly. Unlike most birds, kiwis' bones are not hollow. Instead, they have bone marrow just like you and I! Another unusual trait of kiwis is their sense of smell. They are the only birds known to have nostrils at the tip of their beaks. This sense of smell helps them find food.

Kiwis are about the size of a chicken. They do not have tails. They have four sharp claws. Three claws face frontward. One claw faces backward. When they are in danger, kiwis will kick their enemies. Kiwis are mostly active at night. They seek cover in burrows during the day. At night, they come out to search for food. When kiwis are hungry, they poke around the soil with their slender beaks. They eat worms, insects, or other small animals. Kiwis also eat fruits and seeds. With their nostrils, they can easily sniff out food in the ground.