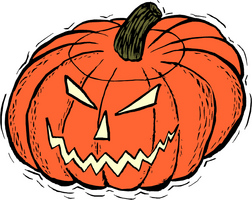 The Legend of Stingy Jack

There are many guesses about the origin of the term jack-o'-lantern. Some sources say that the word "jack-o'-lantern" first appeared in print in 1750. It supposedly referred to a night watchman or a man carrying a lantern. Other sources say that carving pumpkins with the scary or silly faces of a jack-o'-lantern came from an old Celtic practice of carving out turnips to make lanterns. These turnip lanterns were actually used to find the path home as the winter nights became longer.

One of the most interesting stories about the origins of the word jack-o'-lantern comes from the Celtic myth about a man nicknamed "Stingy Jack." Stingy Jack was an Irish man who was mean as well as stingy. He played tricks on people, too. He played tricks on his friends, his family, his minister, and even the Devil himself.