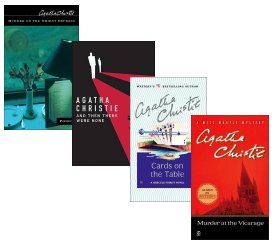 The Life of Agatha Christie

Can you name someone famous who was born on September 15, 1890? If you are a good detective, you might be able to figure it out. That's the birth date of perhaps the world's best-known mystery author - Agatha Christie.

Agatha was born to Frederick and Clara Miller in Torquay, England. Her father passed away when she was eleven years old. Until that time, Agatha had been educated at home. Part of her education included her mother's encouragement to write even when Agatha was little. That effort certainly paid off.

When Agatha was fifteen, she was sent to school in Paris. There she focused her studies on singing and piano. Agatha was actually an accomplished pianist. However, she was very shy and suffered from stage fright. Therefore, there appeared to be no career for her in music.

In 1914, Agatha married Colonel Archibald Christie. Archie was an aviator in the Royal Flying Corps. Their daughter, Rosalind, was born in 1919.