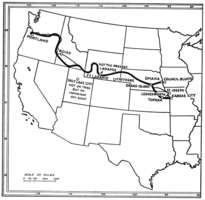 The sun hasn't come up yet, but you are already up and working. After a breakfast of coffee, bacon, and dry bread, you help your family pack the wagon. By seven in the morning, you are walking again. It is another day almost the same as yesterday. You are heading west on the Oregon Trail.

The trip is boring, tiring, and dangerous. Most of the travelers will walk the entire way. Most wagon trains will go about fifteen miles each day. The trip will take at least four months. The people that make the trip in five months or less do very well. Taking longer than that can be dangerous. If the wagon train does not get through the mountains before the end of summer, the whole group could get stuck in snow in the mountains.

People also didn't ride in the wagons because they wanted less weight for the oxen to pull. Even with less weight, many oxen would die. Some of them were too tired to go any farther. Others would die of thirst. One man who traveled on the trail wrote home about the number of dead oxen that he had seen. He said that it was hard to find a place to camp because of all the dead animals.

Leaving behind favorite things was also something people on the trail had to face. Heirlooms and wedding gifts were left behind. As the oxen became more and more tired, more items were taken out of the wagons. Trails that were harder to travel on were littered with stuff.