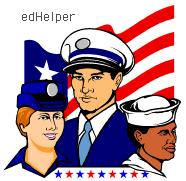 The Origin of Veterans Day

Have you ever wondered why we celebrate Veterans Day? Wars are a part of every nation's history. Almost 100 years ago, an official day was set aside in the United States to honor those who had fought for their country.

In 1921, the body of an unidentified American soldier from World War I was brought to Washington, D.C. At 11:00 a.m. on November 11, 1921, he was buried in a special place in Arlington National Cemetery. It was called the Tomb of the Unknown Soldier. President Warren Harding presided over the ceremony.