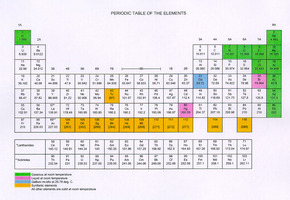 The periodic table is a visual way to arrange the elements. Each element has its own square on the periodic table. That small square can tell you a lot about its element. You will see the atomic number of each element. You will see the chemical symbol and the element's name. You will also see the atomic mass number in each square. It tells the total number of protons and neutrons in the nucleus.

The color of the chemical symbol might mean something, too. Sometimes the background colors of the squares mean something else. These colors are often used to show which elements are metals, metalloids, or nonmetals. On the Table there will be a key or legend. It is just like a map's key or legend. The legend or key will explain what different colors mean. Many periodic tables show the element's normal state of matter at room temperature. Some elements are gases at room temperature. Some are liquids, and some are solids.