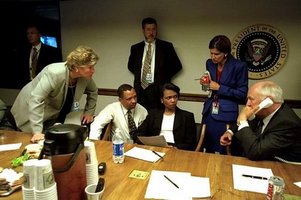 The president has hundreds of people to help him do his job as the chief executive of the United States. In addition to the cabinet secretaries, there are many other assistants who assist the president as needed.

Some of these positions have been around for a long time. Others were added by later presidents. Still others have been dropped. Some are new.

Jobs in the executive office of the president are usually short term. Many last only as long as the current president is in office. Still, there are always more than enough applicants for the jobs. For many people interested in politics, the White House is the place to be.

The chief of staff has many other duties as well. He may lobby Congress to try to get laws passed that are important to the president. He may also hire and supervise people on the White House staff.