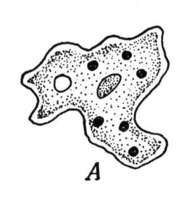 The protist kingdom (or Kingdom Protista) is made up of one-celled (unicellular) organisms and simple many-celled (multi-cellular) organisms. All protists live in moist surroundings. In general, the protists include organisms whose cells have a nucleus enclosed by a membrane and who do not fit into the other kingdoms.

Protists are mostly one-celled organisms. Some make their own food, but most take in or absorb food. Most protists move with the help of flagella, pseudopods, or cilia. Some protists, like the one-celled amoeba and paramecium, feed on other organisms. Others, such as the one-celled euglena or the many-celled algae, make their food by photosynthesis.

Many of these protists can be found in a drop of pond or lake water. Because of the diversity of this kingdom, scientists often divide it into animal-like protists, plant-like protists, and fungus-like protists.