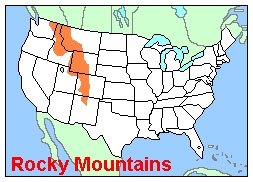 The Rocky Mountains are a long and high mountain range. They are 3,000 miles long. They have a simple nickname- the Rockies. The Rockies are in the western United States and western Canada.

The highest peak in the United States Rockies is Mount Elbert in Colorado. It reaches 14,440 feet above sea level at its highest point. In the Canadian Rockies, the highest point is 12,972 feet. This mountain is named Mount Robson.

Rivers that flow from the Rockies eventually empty into three oceans- the Atlantic, the Pacific, and the Arctic. The Rocky Mountain Range goes from British Columbia in Canada to New Mexico.