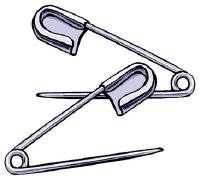 Have you ever wished you could invent something? Look at the things around you. Some things would take a very long time to figure out, like the TV or the computer or a camcorder. We often use those things without thinking about all of the thought that went into inventing them.

Now look around and see some simple things that have been invented. We have lunch boxes, nail clippers, clothes pins, and safety pins. Have you ever used a safety pin? It is a great little tool for holding things together. Best of all, once it's closed, it won't hurt you. Have you ever wondered where safety pins came from?

There have been many kinds of pins over the years. Some were invented a long time ago. But the safety pin we have now was invented by a man named Walter Hunt. He had invented many different things, like a sewing machine, a street car bell, a knife sharpener, and a flax spinner. He liked to think about problems and invent things to take care of them.