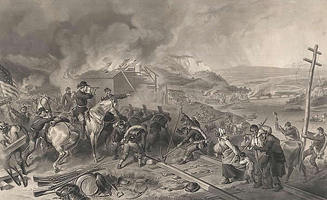 The Civil War cost more than any other war before it. Both the North and the South had to find ways to raise money. The economy in each part of the country was affected in different ways. The South had a harder time than the North.

There weren't a lot of factories in the South. The people in the South depended on their cotton to get what they needed. The South sold cotton to the North and to other countries. The South could then buy what it needed.

The war hurt the cotton trade. The North set up a blockade in the waters off the coast of Southern ports. This blockade kept ships from leaving. The South had a hard time getting their cotton to other countries to sell. To try to get help to break the blockade, the South refused to sell cotton to Great Britain. The South hoped that Great Britain would then help break the blockade so it could get more cotton.