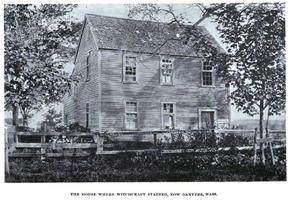 The "Witches" of Salem, Massachusetts: Part 2

After lengthy questioning, both Mrs. Good and Mrs. Osborn denied ever using witchcraft. Neither of them actually knew the girls. Neither of them was given counsel during these sessions. The questioning continued. The girls were required to face both women and point out the person or persons who had "afflicted" them. The girls pointed at all three women: Tituba, Mrs. Osborn, and Mrs. Good. The women were taken away and put into irons in a Boston prison. The sixty-year-old Mrs. Osborn died in prison on May 10, 1692.

The attention given the young girls had by now gone to their heads. They were enjoying the notoriety. They saw these women being carried off to jail and appeared to become more arrogant than ever. There were several more accusations before it was over. Interestingly enough, the witness who kept record of several of these "examinations" was the Reverend Sam Parris.

The girls began to embellish their "possession" with fits, fainting, and dramatic carrying on. They began accusing more and more women of "afflicting" them. The offenses ranged from pinching, pricking, and poking, to murder. Several of the women accused were often the town's least desirable residents. Some were members of the church in high standing.

Because the town of Salem still did not have a charter under its new leadership, they did not have a court in which to try their prisoners. The prisoners were held in shackles in Boston until a court could be convened. On May 14, 1692, Sir William Phipps arrived in Salem with the town's charter. The Massachusetts governor appointed eight men to be in charge of court proceedings. The first session of court was held on June 2, 1692. By the time court convened, there were sixty-two people in custody for witchcraft.