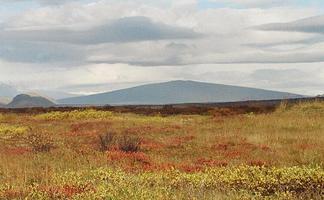 A shield volcano in Iceland

All volcanoes are formed by magma from inside the Earth. Different chemicals and minerals are found in magma. This makes the lava act differently. (It's called magma inside the earth. When it erupts onto earth's surface, it is called lava.) Different types of lava affect the shape of the mountain.

Sometimes lava flows very slowly from a volcanic vent. The lava is very fluid and flows over a large distance before it cools and hardens. It is mostly basalt (a type of rock). After erupting for maybe thousands of years, a mountain is built. The mountain has broad, gently sloped sides. It is called a shield volcano. Mauna Loa in Hawaii is a shield volcano.