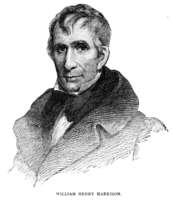 "Tippecanoe and Tyler, Too"

Being President of the United States is one of the most important jobs in the world. Men and women work for years in order to get elected. Imagine after doing all that work you win the election. Then imagine that you die only one month after you start the job. That is what happened to William Henry Harrison.

Harrison was born in 1773. His father was one of the men who signed the Declaration of Independence. His family was wealthy. Harrison went to college to be a doctor. This was what his father wanted him to do. His father died in 1791. Then Harrison joined the Army.

He served in the Army until 1798. In 1800, he became governor of the Indiana Territory. He was a strong governor. He did things the way that he thought they should be done. He did not listen to others' ideas very often.

Many people did not like him. But he did help the country become more powerful. While governor, he also worked as Superintendent for Indian Affairs. He talked many Native Americans into giving up land in the Northwest.

Not all tribes would leave, though. One that would not was the Shawnee. A man named Tecumseh led them. While Tecumseh was away, Harrison attacked a large Shawnee village called Prophetstown. In 1811 at the Battle of Tippecanoe, the village was destroyed.