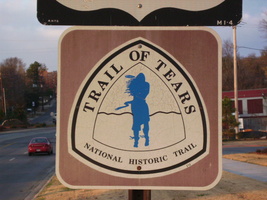 The Cherokee people once freely roamed more than 44,000 square miles of what is now the southeastern United States. The first Cherokee contact with whites came in 1540. A Spanish explorer named Hernando de Soto came through their land in search of gold. De Soto did not find what he was looking for. He took little more than food from the Cherokees. They took little notice of the white man then. The Cherokee kept their distance from strangers and carried on as they always had for centuries.

The colonists kept coming. They had very different ways. They cleared Cherokee hunting grounds. They did not use bows and arrows. They used guns. They brought horses. They taught the Cherokees how to ride and use guns. The white men were changing the Cherokee way of life.