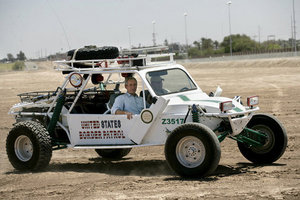 Immigrants to the United States are welcomed through various legal points of entry. Since the early 1900s, though, the country has been aware of those trying to illegally enter at its borders. As early as 1904, there were inspectors called Mounted Guards working from El Paso, Texas. They tried to prevent illegal crossings, but they were not very successful.

Around ten years later, Congress authorized Mounted Inspectors and gave them more authority. Most of them were still on horseback, but some did begin to use cars and boats. Then, on May 28, 1924, the Border Patrol was founded. At the time, it was part of the Department of Labor. Mounted agents patrolled the border in areas that were desolate. For a while, it was a part of the Immigration and Naturalization Service. This was part of the Department of Justice.

Then September 11 attacks occurred. The Border Patrol merged into the Department of Homeland Security, specifically the U. S. Customs and Border Protection. Its mission still includes the prevention of illegal immigration but has broadened to include the specific prevention of entrance of terrorists.