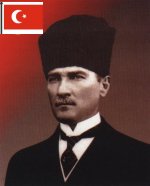 Victory Day and Turkish Armed Forces Day is a national holiday that is celebrated in Turkey on August 30. This day is remembered as the day that marked independence for Turkey. Its origins date back to a five-day battle that ended on August 30, 1922, at Dumlupýnar. It is celebrated as Turkey's armed forces lay wreaths at the Ataturk Mausoleum in Istanbul. They honor the role Mustafa Kemal Ataturk played in founding the Republic of Turkey.

Mustafa Kemal became the republic's first president. He later introduced many radical reforms. According to the Law on Family Names, the Turkish parliament presented Mustafa Kemal with the honorific name "Atatürk" (Father of the Turks)in 1934. "Father Turk" is considered Turkey's founding father.

Mustafa Kemal was born in Salonika in the Ottoman Empire in 1881. Founded by Turkish warriors in the 14th and 15th centuries, the Ottoman Empire once stretched from the Middle East to North Africa and southeastern Europe. At its greatest, the Ottoman Empire was a huge political and military force. By the time Ataturk was born, it was falling apart. Countries were declaring their independence from the Ottomans.