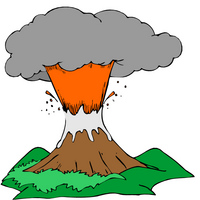 A volcano erupts. Debris is thrown high into the air. It forms a billowy cloud that can travel for miles. What is all this material that spews from the vent of a volcano?

There are several types of material that spill from a volcano. Solid particles are called tephra. This material is made of rock fragments. It can come from several sources. Tephra can be pieces of hardened lava. It can be mineral grains or pieces of the cone. These particles are classified by size. The smallest pieces of tephra are called volcanic dust. The particles have a diameter less than 0.063 millimeters. It is a very fine material, almost like powder. Another type of tephra is called ash. Volcanic ash particles have a diameter between 0.064 and 2 millimeters. Particles larger than 2 millimeters but smaller than 64 millimeters are classified as lapilli. Lapilli may fall to the surface and form small rocks. Dust, ash, and lapilli are easily seen during violent volcanic eruptions. They can be blown high into the air and carried away by the wind. They eventually land, perhaps near the volcano or as far away as the other side of the Earth! Clouds of tephra can block the sun and cause long-term changes in the weather. Larger rock particles of tephra can measure up to several meters in diameter. These are called volcanic bombs. These particles are molten blobs of lava when they leave the vent. As they travel through the air, they become solid.

A soupy mixture of gas, ash, and other tephra is called a pyroclastic flow. This material can be very dangerous. It is very hot! Temperatures of pyroclastic flows can reach over 700 degrees Celsius. They can travel at speeds of more than 200 kilometers per hour. Pyroclastic flows can contain poisonous gases. They move rapidly down the slope of the volcano. Everything in their path is destroyed.