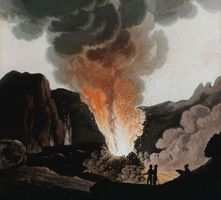 You've probably had some accidents in your lifetime. Have you ever cut yourself accidentally? A lot of things happen when you cut yourself. First of all, it hurts. Sometimes it hurts a lot. Secondly, many cuts bleed. Your body forms a scab. Sure, they're gross, but scabs keep you from bleeding to death. That whole process makes you a little like a volcano.

The Earth is made up of many parts. Deep inside the Earth is very hot. It's hot enough to melt rocks. This layer of hot, molten rock is called the mantle. Around the mantle is a relatively thin layer called the crust. Sand, soil, bedrock, mountains, and ocean floors are all part of the crust.

The crust is always changing. Continents are always moving. Parts of the crust pull apart and push together. All this pushing and pulling creates breaks in the Earth's surface, much like a cut breaks the surface of your body. Like blood coming out of a cut on your arm, melted (molten) rock - called magma - escapes from breaks in the Earth's surface sometimes. Magma is under great pressure. Sometimes the pressure is so great that it shoots melted rock and ashes high into the air. As magma escapes, it cools. When it cools, it hardens. More lava - magma that has come out of the ground - flows on top, and it hardens, too. This can go on and on to create mountains. Sometimes, cooled lava can cover the cut in the Earth's crust and stop more lava from escaping. Sometimes magma can burst through the cooled lava and cause another eruption.