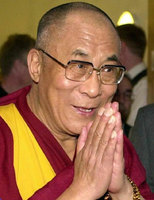 What Is Tibetan Buddhism?

Peaceful prayer flags flutter in the fresh breezes in all mountain communities of Tibet. These multi-colored flags are a symbol of Tibetan Buddhism. Buddhism, which came to Tibet in the 8th century, had surprisingly dramatic beginnings. According to Buddhist legends, this religion began when a king had a big problem. Many demons were wreaking havoc on his snowy mountain kingdom. He desperately needed help!

Padma Sambhava came to the king's rescue. According to legends, he was born in a lotus blossom. The bright young man became famous because he memorized all the sacred scriptures after only hearing them once. Upon hearing about the demon-infestation, Padma Sambhava walked all over Tibet. He blessed the land. He blessed the lakes. He blessed the caves. Padma Sambhava didn't just get rid of the demons-he actually converted them to Buddhism. These beings became known as the protectors of Buddhism. Padma Sambhava then started the first Buddhist monastery in Tibet, and guess who guarded its gates: the demons that used to bother everyone! That is why Tibetan Buddhist temples often have fierce demon statues around them.

Padma Sambhava brought Gautama Buddha's teachings to Tibet, but Buddhism has two main branches. One group in Southeast Asia concentrates on studying the life and teachings of Gautama Buddha. Prince Siddhartha Gautama lived around 563 B.C. He grew up in a royal palace, but he left his luxurious life to seek enlightenment. He tried for six long years. He finally achieved enlightenment, and he became the Buddha.