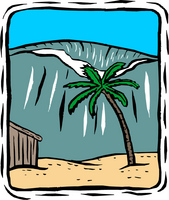 What Is a Tsunami?

A tsunami (sue NAH me) is a string of large ocean waves. Some people call it "a wave train" or a "tidal wave." Tsunamis, unlike normal ocean waves, are not caused by tides. The word tsunami comes from the Japanese. Tsunamis are caused by a sudden, large motion on the ocean floor. They can be caused by an earthquake under the ocean. Sometimes an underwater landslide or volcano is the cause. When one of these things happens, the energy passes through the ocean water. Just like the ripples from a rock being thrown into a pond, the energy released by one of these motions spreads out in all directions.

The energy can travel many miles away. Tsunamis move at high speeds. Most tsunamis happen in the Pacific Ocean. In the deep waters, a tsunami may travel 450 miles per hour. Out in the ocean, a tsunami may be hard to see. As it comes close to shore, its speed slows down. The height of the wave builds. The tsunami may suddenly rise into a wave ten to one hundred feet high. These large waves are a disaster for coastal regions and people living there. Tsunami warning networks alert people living along coastlines in the Pacific Ocean. When a warning is sounded, people can move away from the coast to higher ground. The wavelength can be as long as 150 miles. This means the time (wave period) between the giant waves is long, too. Giant waves on shore can last for hours or even days after the earthquake or other disturbance.