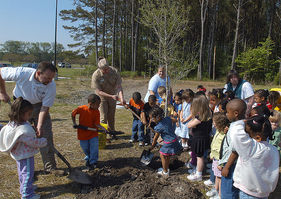 Why Do We Have Arbor Day?

In 1854, a man named J. Sterling Morton and his wife moved from Michigan to the Nebraska Territory. The Mortons loved nature, especially trees. Mr. Morton became a journalist and editor for a newspaper in Nebraska. He wrote about agricultural information. He used the newspaper as a way to spread his love for trees to others.

Mr. Morton felt that Nebraska needed more trees. He felt that trees would provide protection from the wind and help keep the soil in place. Trees could be used as fuel and for building new homes and businesses. Trees would also give shade from the hot sun. Other pioneers shared Mr. Morton's feelings about trees.

Mr. Morton became the Secretary of the Nebraska Territory. He used his new position to continue to spread information about the importance of planting trees. Mr. Morton suggested a new holiday. He called it Arbor Day. The word "arbor" comes from the Latin word for tree. Arbor Day would be used to encourage tree planting in the Nebraska Territory. Prizes were offered to those who properly planted the most trees. It was celebrated on April 10, 1872. It is estimated that over one million trees were planted on the first Arbor Day.