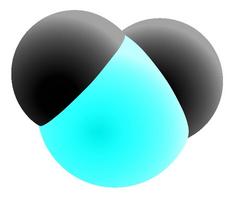 Water covers almost three-fourths of Earth's surface. We drink it. We wash with it. We swim in it. We use it to grow food. We can't live without it! How much do you know about wonderful water?

Did you ever wonder what water is made of? It is made of two gases. Oxygen, a gas we need to breathe, is one. Hydrogen is the other. Each molecule of water is made up of one atom of oxygen and two atoms of hydrogen joined together. A chemical symbol is like a recipe. Water's chemical symbol is H2O. This is the "recipe" for water. When two hydrogen atoms join with one oxygen atom, the shape of the molecule looks like Mickey Mouse - one large "head" with two smaller "ears."

Even though both parts of water's recipe are gases, water is usually a liquid. Water freezes into ice when it is colder than 32 degrees F. and then becomes a solid. It becomes a gas called water vapor when it gets hotter than 212 degrees F. Water is one of very few substances found on Earth in all three states (solid, liquid, and gas). In equal volumes, frozen water is lighter than liquid water. That is why ice floats. Solid water takes up more space than liquid water. That is why your glass never overflows when ice melts. It is also why a closed bottle will burst when frozen if it is filled full of water.