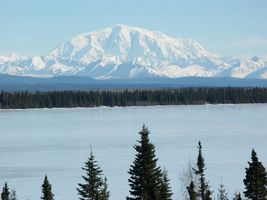 The largest national park in the United States is six times the size of Yellowstone, but few Americans have ever seen it! Wrangell-St. Elias National Park is in Alaska and is part of the largest internationally protected wildland on earth.

According to park rangers at Wrangell-St. Elias, there is no way to really see the park besides flying over it. Local pilots say that it takes several flights to get an idea of all the park has to offer, and even then, a visitor won't see all of the 13.1 million acres.

Four mountain ranges meet in the park: the Alaska Range, the St. Elias Mountains, the Wrangells, and the Chugach Mountains. Mount St. Elias reaches 18,008 feet, the second highest mountain in the United States. Mount Wrangell is a volcano and still puts out occasional plumes of steam.