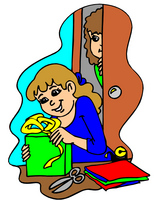 Jen was starting to get mad. She was trying to wrap a birthday gift for her friend Mandy. Her mom came into the room and saw the look on Jen's face. "What's wrong?" she asked.

"This is the third time I've tried to wrap this gift. I just can't get it right," Jen told her.

"Let me help you," Jen's mom said. She looked at the gift. The paper at the corners of the box was torn. There was a big gap in the back. Jen's mom almost chuckled. But seeing the look on Jen's face told her she'd better not.

Jen's mom took the wrapping paper off the gift. "Let's start all over. First of all, it's easier to wrap a gift on a table. That way, there is a hard surface to work on. You don't have to bend over, either. If you clear off the kitchen table, we'll work there," Jen's mom told her.

Jen cleared off the table. She made sure the surface was clean. She didn't want her little brother's jelly from breakfast all over her gift.

"Now, we need the gift, the wrapping paper, the scissors, and the tape," Jen's mom said. Jen went to get all the supplies. She brought them to the table.

Jen's mom began to unroll the wrapping paper. She put it on the table so that the printed side was facing down. Then she put the gift down on the plain side. "You have to check to make sure the paper is going to fit before you cut it," Jen's mom told her. She folded the cut side of the paper up over the gift box. Then she took the part that was still on the roll and folded it over the other side.

Jen's mom kept unrolling paper until the rolled side overlapped the cut side just a little. Then she made a little cut on the edge with the scissors. Next, she unfolded the paper and took the gift off of it. She began to cut the paper off the roll, starting from where she had made the little cut. She made sure to cut in a straight line. Then she put the rest of the roll of paper aside.