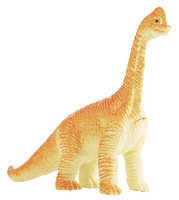 Brachiosaurus (BRAK-ee-oh-SORE-us) was a dinosaur that lived about 155 million years ago. It was one of the largest of all dinosaurs. It may have weighed as much as twelve large elephants! It was so tall that it could have looked over the top of a four-story building. It could have won the award for the tallest dinosaur!

Brachiosaurus walked on four legs. Its front legs were longer than its back legs. Look at a picture of a giraffe. You will see that giraffes' legs are like this, too. Brachiosaurus had a very long neck. It had a heavy, thick body. It had a long, thick tail. Its nostrils were located on the top of its head!