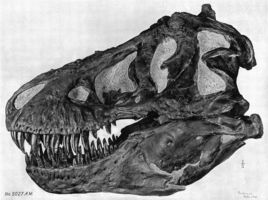 Tyrannosaurus rex (tih-RAN-uh-SORE-us REHX) was a dinosaur that lived on Earth 67 million years ago. Its name means "tyrant lizard king." It was one of the biggest carnivores that ever lived. Carnivores are animals that eat meat.

T. rex was as tall as a two-story building and as long as a school bus. It walked on its two thick, heavy back legs. It had a thick, heavy tail. It had a huge head with sharp teeth that were six inches long. It had tiny little arms with only two fingers on each hand. The tiny arms might have been to help balance its heavy head. If the arms were larger and heavier, T. rex might have fallen on his face!