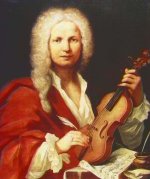 Antonio Vivaldi, Music for All Seasons

Can you imagine what it would be like to work through most of your life on projects that would not be fully appreciated until long after your death? That is the legacy of composer Antonio Vivaldi, perhaps best known for his musical work, The Four Seasons. This piece of work is actually a collection of four concertos, compositions for a violin soloist accompanied by an orchestra. Each of the pieces represents one season of the year, and the style and tone of the music reflect the feelings experienced during those seasons, such as a darker, more serious sound for the winter season.

Antonio Vivaldi was born on March 4, 1678, and from the beginning experienced some health problems, possibly asthma. He was taught to play the violin by his father. When he was a teenager, he also prepared to become a priest and was ordained at the age of 25. His health kept him from actively practicing the priesthood, but he continued his musical activities throughout his life.

In his early twenties, Vivaldi used music to bless others. He worked at an orphanage for several years, teaching violin and writing music. Later, some of his work was published. He maintained contact with the orphanage, still doing some work for them and also started to travel.