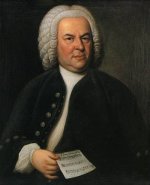 When thinking of classical music composers, the name of Johann Sebastian Bach often comes to mind. He wrote many pieces of music, and some pieces are still popular today. He was very skilled in producing beautiful pieces that had depth to them as well.

Bach came from a long line of musicians. His own father played trumpet and violin, and many other family members were talented in music. His father worked as a court trumpeter and director of the town musicians. Johann kept written records of his family's contributions to music.

Sadly, Bach's parents both died while Bach was very young - around ten years old. He was then raised by his oldest brother, who gave him many opportunities to learn music and be exposed to talented artists such as Pachelbel. In his early teen years, he studied at a prestigious school with a friend, and, in addition to music, was educated in many other subjects. After he graduated, he began work as a court musician for Duke Johann Ernst in Weimar. Later, he became an organist for a church.

Although he stayed in that position for several years, at times Bach acted rather independently. During one period, he left his responsibilities without permission to study for several months with another musical mentor. Eventually, he left the church job and moved on to another city and an organist position with more promise. He married and had seven children, three of whom passed away before adulthood.

Bach again moved on when he was offered an even better position in Weimar, the town where he began his career. By now, he had an established reputation. He held an honored position of leadership. He created many works during his nine years there.