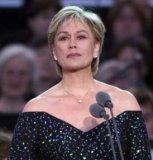 Imagine singing in some of the most famous operas in history. Imagine performing these operas in famous opera houses around the world. Dame Kiri Te Kanawa has accomplished both of these goals and many more throughout her career.

Dame Kiri Te Kanawa began her journey on March 6, 1944, in Gisborne, New Zealand. Her family is of Maori ancestry. This means that her family tree includes relatives from native Maori tribes. Dame Te Kanawa was adopted as an infant by an Irish mother and a Maori father. She started singing in her early teens. She performed pop music until her early twenties. Dame Te Kanawa became a popular performer in New Zealand night clubs.

Dame Te Kanawa was introduced to opera in 1959. She started training with Dame Sister Mary Leo at St. Mary's College in Auckland, New Zealand. Dame Sister Leo was a well-known opera coach in New Zealand. Dame Te Kanawa trained at St. Mary's until 1965. At the beginning of her career, she was a mezzo-soprano. As she continued her career, she became a soprano. Shortly after leaving St. Mary's, she recorded the "Nun's Chorus" from the Strauss Operetta Casanova. It became New Zealand's first ever gold record.