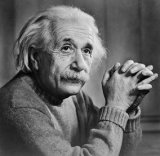 Albert Einstein thought it was funny that people called him a genius. He thought of himself as an ordinary person who was passionately curious. Curiosity made Albert Einstein the greatest mathematical genius of the twentieth century.

Albert was born on March 14, 1879, in Ulm, a small city in southern Germany. According to family stories, he had such a large, odd head that his mother was afraid he was deformed. Albert learned to talk so late that his parents went to a doctor to find out if anything was wrong. He finally began to talk when he was between two and three years old, much to everyone's relief. They had no idea that this boy would grow up to have so much to say.

Young Albert loved to play with building blocks rather than rough games. His most spectacular tower was 14 stories high. One day, his parents said they had a surprise for him, and Albert expected a toy. Instead, he got a baby sister. An astounded Albert asked where her wheels were because he didn't see how she could do very much without them. His disappointment didn't last because she soon became his best friend.

However, like all brothers and sisters, Albert and Maja didn't always get along. It probably didn't help when Albert threw things at her, like a bowling ball! Maja took it well and survived these attacks, but she later joked, "It takes a sound skull to be the sister of an intellectual." Maja would remain Albert's his close companion for the rest of his life.