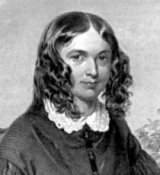 There are some subjects on which people are sharply divided, and one of those is poetry. There is little middle ground; most people either love poetry or hate it. Sometimes, though, it is the life story of an author that changes what people think. Such is the case of Elizabeth Barrett Browning.

Elizabeth Barrett was born at Coxhoe Hall in Durham, England, on March 6, 1806. Her father, Edward, had made his fortune from sugar plantations in Jamaica. As his fortune grew, his family moved to grander homes. Elizabeth was three when they moved to the grandest one in which they would live, an estate called Hope End near the Malvern Hills.

As a young girl, Elizabeth proved her thirst for knowledge by studying history and by reading Shakespeare and translations of Homer. She accomplished this all before she was ten. As a teenager, her thirst for learning only increased. She began studying languages and could soon read Greek, Latin, and Hebrew.