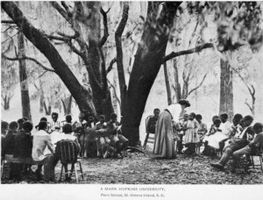 Laura Matilda Towne was born on May 3, 1825, in Pittsburgh. Her mother died when Laura was little. Her father was a businessman, and he made a lot of money in farming and shipping. Then he became a superintendent of the gas works in Boston.

Growing up in Boston and Philadelphia, Laura had friends with modern ideas. She became dedicated to abolition. She studied for a time at Philadelphia's Women's Medical College, although there's no proof that she earned a medical degree. She was also trained to be a teacher. In the 1850s, Laura taught in charity schools in northern towns.

Then the Civil War began. In 1861, the Sea Islands of South Carolina fell to the Union. The whites in the area fled, leaving everything behind, including ten thousand slaves. In 1862, there was a call for help. Volunteers were needed as teachers and nurses. This was called the Port Royal Experiment. Laura decided to volunteer to help former slaves. She believed she would be a secretary and housekeeper to some of the officers. However, she became much more active. She began meeting the needs of the sick freed slaves. She was drawn to teaching. She taught reading, writing, and social skills. She wanted to help them in their change to freedom.