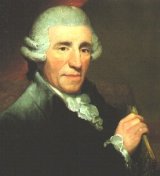 Franz Joseph Haydn was born in March, 1732. In his early life, he performed as a choir boy. He learned to play the violin and keyboards, and for the rest of his life he made a living with music.

Haydn was fortunate to become employed early on by the Esterhazy family, an influential family in Hungary. For much of his life, he oversaw musical performances and composed music as desired by the family. Because of this opportunity, he was able to write many pieces and create a large body of work, much of which is still enjoyed today.

The life of a composer in this situation could be interesting. Imagine having a love for music and having the opportunity to earn your living through it. Haydn prepared concert pieces as there would be two concerts per week. He also prepared pieces that the prince could play on his own instrument. So, in essence, Haydn was a mix of composer, performer, and teacher.