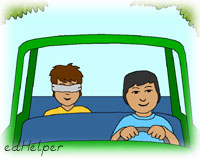 "Hold still while I tie on this blindfold, Tony," said Dad as he adjusted it and made sure it was snug. "Is that too tight?" he asked.

"That is for me to know and you to find out," said Dad.

Tony could hear the smile in his voice as he checked Tony's seatbelt.

Dad spoke again. "If you want to make some wild guesses, I might give you some clues about where we are going."

Tony nodded his head and wondered what Dad had planned. It felt strange not to be able to see, but it did make it easier to hear things. He felt the car move after hearing Dad start it and put it into gear. Tony leaned as the car turned onto the road at the end of the driveway. Tony concentrated on trying to figure out where they were going. It wasn't long before he was lost. He had to get some clues!

"I know where we are going," said Tony. "We are going to the junk yard to get some parts for the truck."

"Is that what you call a wild guess?" asked Dad. "It's not very wild. In fact, it seems quite tame to me."

Tony frowned. This was harder than he thought.